My name is Brett Halvorson. I was born in South Korea as Lee Kil Woo. In 1983, I was brought over to the United States by President Ronald Reagan, First Lady Nancy Reagan, and Harriet Hodges on Air Force One when I was 4 years old to have open heart surgery through the Gift of Life. Shortly after my surgery, I was adopted by an American family. After the adoption, I had lost touch with everyone from the Reagan’s, Harriet, Gift of Life, and my biological family. I lived in Arizona until 1989, when we moved to the Seattle area. Around 2004-2005, I was thinking about my life and life in general and what it all meant…one thing I knew was that I had to contact the people involved with my past and personally thank them. I thought it would be easiest to contact Mrs. Reagan. After some searching, I finally contacted Mrs. Reagan and reunited with her in California at the Reagan Museum in 2007. Shortly after my reunion with Mrs. Reagan, I was able to reunite with Mrs. Hodges and my biological family. I flew to South Korea with Mrs. Hodges and met my family. Also in this very exciting time in my life I also reunited with GOL. I can not explain the gratitude and feeling I had reuniting with everyone from my past. Other than the day I received my surgery, it has been the best days of my life. All these people involved with me coming to America for heart surgery were coming back into my life so suddenly. All the coincidences that happened regarding these reunions were a miracle. For one example, I had told one of my current clients about my history and come to find out; his good friend had worked for Gift of Life years ago and knew Robbie Donno and contacted him. That was one of the reasons how I was reunited with Gift of Life.

I believe that everything happens for a reason. My reunion with everyone has inspired me to leave my current career to work with Gift of Life. I feel that I cannot pass up this opportunity to pay it forward and give back to the children that are still out there needing heart surgery just as I did 25 years ago. I attended the Gift of Life dinner/dance in New York (District 7250) where I received an Angel Award. I humbly accepted even though I should not be the one receiving this award. I believe the people of Gift of Life are “My Angels.”

I am looking forward to the next chapters of my life and I know they will be rewarding in other ways. As one Gift of Life saying states: Each child who gets operated on is a raindrop that creates a ripple of kindness. In my case, the people of the Gift of Life were the raindrops and I hope to help create the ripples.

In 1983, my heart was physically or surgically healed. In 2007-2008, my heart is spiritually healed. So I thank everyone for the work and dedication that saved my life! Now, it is time for me to give back to others! 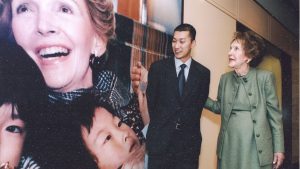 Grace Agwaru: Being the First

Grace Agwaru: Being the First

To: Ivonne Lopez CHILD REFERRAL COORDINATOR GIFT OF LIFE INTERNATIONAL Appreciation Reference is made to…

On behalf of the family, I take this opportunity to thank you for helping Moses to…